Women may be pleased to know that modern British men put romance before football. More than two thirds of men said they’d cancel an important match during the Brazil tournament if their girlfriend or hot date wanted to see them.

A survey also revealed that men would prefer to include wives and girlfriends in watching the match, rather than an all-male group. Perhaps they’ve learned from past experiences because 25% of men and women both reported that they’ve argued with a partner over time spent watching sport. 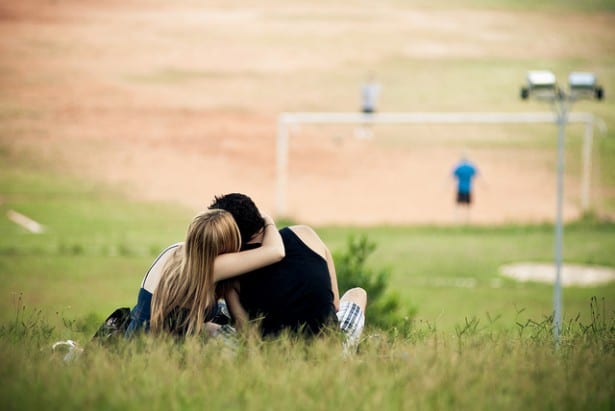 The research by SexShop365, the largest UK online retailer of adult toys, quizzed more than 250 men and women. More than half of men (59%) said that if their girlfriend or hot date asked to see them when an important match was on they’d scrap the footie because she comes first. Only 4% said football comes first. Another 37% expected their girlfriends to be watching it anyway.

When women were asked what they’d do if they were gazumped by the footie, nearly half (43%) said they’d clock it as an offense and expect him to make it up to her in some way. 39% said they wouldn’t be bothered – it is the World Cup after all. Less than a fifth (18%) thought they’d be watching it anyway – boyfriend or not.

While men seem keen to include their wives, girlfriends and dates in the action, the women are less than keen to accept. More than a third of men said their ideal way to watch a match would be with a group of friends which included wives and girlfriends. Only 8% said they’d prefer a group which banned girlfriends. And only 2% wanted to watch it alone. The rest didn’t mind.

However when women were asked what they’d do if their boyfriend or date invited them to watch a match, only 36% said they’d go. Nearly half (43%) said they had better things to do.

When women were asked how much they expected the average guy to watch, nearly half (46%) estimated less than three.

A quarter of all men and all women also admitted that they had at some point argued with a partner about watching sport. Men be warned, get the Sky Plus ready.

Lover of all things FAST. If I am not in the office, you can find me near a track or under a car. I also work with a great people in TrendLife's Editorial team.
@@trendlifepr
Previous ESPA launches at The Spa at Luton Hoo
Next World Cup hair award goes to…

Fall in love with these island hotels

Football is changing and adidas is leading the way

The course of true love never did run smooth, particularly in the movies where star-crossed …