‘Kissing, talking, drinking, eating, smiling. We put our lips through their paces on a daily basis but how can we treat them and make them look our best at the same time?’

DHC are a new brand which is due to launch on August 1st 2014. The lipstick is made to fight anti ageing in two ways.
It uses pure colour technology which is micronised pigments which deflect light which creates a plumping lip effect. Second of all it reduces the appearance of vertical lines with an aray of age busting ingredients which includes macadamia oil, olive oil, rice bran oil which all moisturise and collagen and sodium hyaluronate to lock in the moisture and vitamin A and geranium to protect and condition. What more could you want from a lipstick?!

I was really excited about receiving these products as I love lipstick and will not be seen without it on! What made receiving this extra nice was the handwritten note inside with my products. It made it so much more personal. When I first opened the products I thought they looked a little dark and not something I would go for as I tend to opt for bold and bright colours but after swatching them on my hand the colours looked really different. I was sent ‘rich raspberry’ and ‘bold persimmon’. 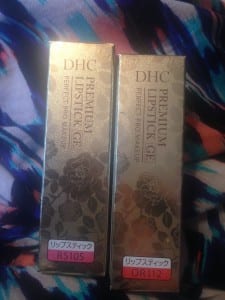 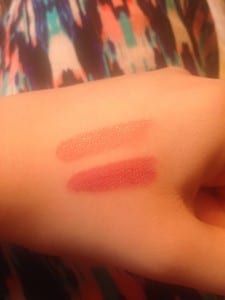 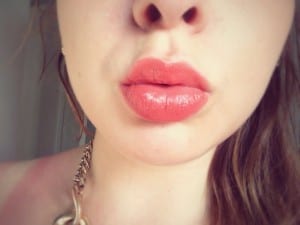 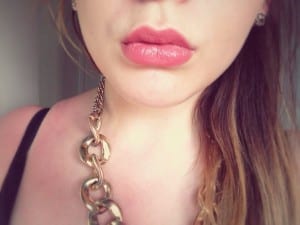 I really liked both of the colours when they were on. They were both really subtle but were bright enough to show you had dressed your lips. The product went on so easily and softly. There was no dragging and didn’t need to go over the lips a few times to get full effect.

I often find that some lipsticks are really heavy. You can feel it on your lips and sometimes it clumps together but with this product I didn’t even feel I had anything on! My lips felt soft and the colour lasted. Another thing I really liked about this product was it looked slightly different colours in different light.
It was really hard to pick my favourite colour as they both matched my skin tone perfectly and looked really soft. The only thing I didn’t like about thus product was it doesn’t stay on too long but in the scheme of things, that is minor. I’m really excited for this to be launched and to try the other colours!

‘So now there really is no excuse to pucker up’

ps, sorry for the sunburn.

One Step Closer to Hollywood with Oral B Technology

Love Brownies, a Yorkshire Dales-inspired chocolate brownie company, is to open a beautiful café and brownie shop in the heart of St Albans,creating a number of jobs and adding a premium brand to St Albans’ bustling high street.

Established in 2009, Love Brownies is known for its decadent brownies and delicious seasonal menus. Originating in the Yorkshire Dales, the brand has a growing network of brownie shops and cafés, with St Albans being the fifteenth to open in the UK. So what makes Love Brownies so outrageously delicious? It’s no secret: they bake each one individually, by hand, using the best ingredients possible.

The new Love Brownies shop in St Albans will offer a mouth watering menu of indulgent handmade chocolate brownies in a variety of tempting flavours, magnificent brownie milkshakes (with vegan alternatives), a range of premium, freshly-brewed coffees and the bold flavours of Northern Bloc ice cream.

Love Brownies’ Head Baker and Owner, Chantal Teal said: “The St Albans shop will be our first to open in Hertfordshire and we’re so excited to bring our award-winning brownies and delicious Dales-inspired menu to a brand new audience.

For those on the go, a delicious ‘Dales Kitchen’ breakfast and lunch menu with pastries and jam-packed sandwiches will also be available for St Albans residents.

Love Brownies’ Head Baker and Owner, Chantal Teal also said “The shop is in a fantastic location and we’re anticipating a busy summer! We’re so pleased to be bringing business into the area during a time that has been so difficult for so many and can’t wait to be a part of the St Albans community.”

Where to find Love Brownies in St Albans?

The new Love Brownies café will be located at Number 1, Market Place and will open to the public at 8am on Wednesday 21 July. For more information about Love Brownies or to see a sample menu visit www.lovebrownies.co.uk or follow @lovebrowniesbakery on Facebook and Instagram.

After a difficult 18 months of lockdowns and restrictions, St Albans residents can look forward to a laugh in the park as St Albans Comedy Garden brings laughs to Verulamium Park.

From Wednesday 28th July to Sunday 1st August comedy-lovers from St Albans and beyond will be treated to a dazzling array of stand-up superstars including the multi-award winning SARA PASCOE, the glorious DARA O’BRIAIN, observational wizard JOSH WIDDICOMBE, the stupendous ALAN DAVIES, riotous TOM ALLEN and the magnetic ROB BECKETT to name but a few.

This series of magnificent mixed-bill shows will be presented in an open-air theatre set in St Alban’s beautiful Verulamium Park. The comedy extravaganza will be brim full with pop-up bars serving craft beers, summer-styled cocktails and more to wash down tasty morsels from the leading lights of the local street-food scene.

In response to the Covid-19 pandemic the Comedy Garden has been specially designed to reflect the Government’s Roadmap, with added flexibility should the event need to be adapted to suit current guidelines.

All shows will take place in a fully-seated open-air theatre with tickets sold in multiples of two, these key features are designed to ensure a smooth transition should social distancing need to be introduced across the event. If necessary the theatre-style seating will be transformed into socially-distanced seating plots and walk-up bars and street-food stalls will be replaced with a deliver-to-seat drink and snack service.

Tickets for some of the shows are already sold out. Tickets for Wednesday 28th July with headline act Josh Widdicombe are sold out. The same applies for the late show on Saturday 31st July headlined by Tom Allen and Sunday’s 3.30pm show headlined by Dara Ó Briain. All other tickets are available at this time. For more info on tickets, click here.

The team behind the Comedy Garden, 57 Festivals, have already successfully delivered a covid-secure event with their Greenwich Comedy Festival in September 2020.

This new St Albans event is the latest venture from the London-based comedy event company run by sibling-team Will Briggs and Cass Randolph. The pair have spent the last decade building a reputation for delivering meticulous comedy programming in boutique-festival settings.

Starting back in 2009 with the Capital’s critically acclaimed Greenwich Comedy Festival, held annually at the National Maritime Museum, the pair went on to introduce their Comedy Garden event to Bristol in 2011, followed by Brighton in 2019, and they are now incredibly excited to be bringing their winning formula to the cultural heart of Hertfordshire.

Cass say “The live industry has had a tough time of late and so we feel very lucky to have been able to reimagine our events to suit these challenging times, and we’re especially proud to be introducing this new event.”

Will adds: “There’s no doubt that everyone deserves some excellent live entertainment and we can’t wait to bring exactly that to our new St Albans audience. We’re working closely with the local council and our suppliers to make sure we deliver an event that is safe and enjoyable for everyone – and above all very funny!”

This summer’s event is all set to be a rib-tickling remedy to the past year, so get your tickets now and be part of the first-ever St Albans Comedy Garden! Visit the website to find out more www.stalbanscomedygarden.co.uk

After overcoming Denmark to reach the European final, England and their fans excitement to play Italy in the English home of football may have been dashed. UEFA have decided to move home advantage from England to Italy by demanding the Euros 2020 final takes places at Meadow Lane, Bedford instead of Wembley. Bedford is unofficially referred to a Britain’s ‘little Italy’ thanks to it large Italian population.

Why switch from Wembley to Bedford?

One of the talking points of England’s win over Denmark was the clear advantage England had over the Danes. With over 58,034 of the supporters at the game being England fans compared to the Danes 1,966, UEFA have decided that they want to remove home advantage away from England. According to UEFA’s Fair Play officials Stan Dupp and Fumagalli Enzo, switching the Euro 2020 finals from Wembley to Bedford means Italy can also benefit from playing on home soil at the same time as England.

Absolutely not. But that is not a problem as Bedford High street will be pedestrianised and large screens will be erected all the way down to the embankment.

Ahead of the clash, England fans heading to Bedford have been advised to brush up on their Italian so we have created a ‘Nine step guide to speaking Italian’ below. These are probably the only nine words you will need to know for the game.