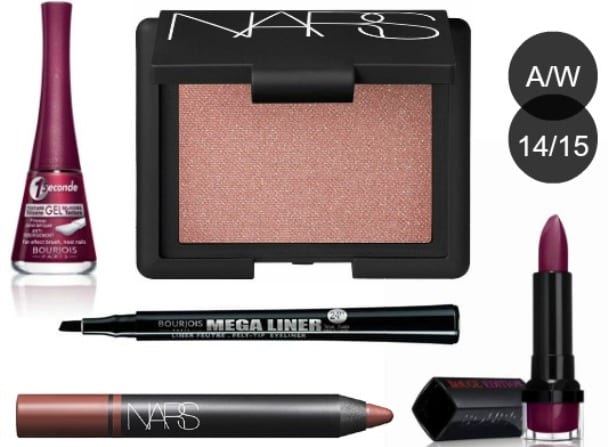 From summer pastels to winter berry tones two brands stick out every season; NARS and Bourjois. Both brands are releasing collections that will make you want to splurge like there’s no tomorrow this A/W.

Bourjois
Never one to let me down Bourjois are yet again on point with their Arctic Winter 2014 Collection; packed full with products that are accessible, affordable and oh so pretty. Black eyeliner is a staple for me anytime of the year so the Mega Liner will make a nice addition to my collection, not to mention Bourjois 1 Seconde Nail Polish in Violet. The eye catcher of the collection has to be the Rouge Edition lipstick, if ever there was a shade that made me go weak at the knees, then this ladies and gents is the one.

NARS
The new for A/W Colour Collection from NARS features 10 new products that give off a luxurious look; soft metallic shades, strong jewel toned eyeliners and perfect lip colours. For me A/W is all about a bold berry toned lip, but this year NARS have bucked the trend and gone subtle; they have introduced two new lip pencils – Bansar and Mondore. Bansar is the stand out of the collection, for me, along with the latest addition to their famous blushes – Unlawful. NARS are famed for their amazing blushers and I for one cannot wait to get my hands on Unlawful; a slightly shimmery pink/amber.

I know we are still in the middle of summer but yet I can’t help but get a little excited for winter and all the new beauty releases it brings. A/W 14/15 is going to be a beautiful one.

Tips For Cleaning Your Make-Up Brushes

Beauty blogger, lipstick hoarder, gin drinker and all round good egg. You can find my ramblings at http://www.teapartybeauty.com

IV Boost – a renowned IV therapy clinic on London’s Wimpole Street – has opened at The Wellness Hub in Berkhamsted.  Founded in 2005 by medical director Dr Joshua Berkowitz, IV Boost takes a holistic approach to health and wellness to help boost and restore the body’s natural ability to be well, energised and able to resist ageing.

“We are delighted to welcome Dr Josh and the IV Boost to The Wellness Hub and are excited to be offering our customers these fantastic IV therapies,” says Emma James, MD and owner The Wellness Hub on Lower Kings Street. “IV Boost prides itself on its medical skills and personalised approach which mirrors our commitment to offering bespoke wellbeing solutions. I have no doubt its services will prove popular in complementing and enhancing our existing range of therapies which include physiotherapy, massage, beauty therapy, sports massage, Pilates, personal training and yoga.”

“We have been very impressed by The Wellness Hub and have been made most welcome here,” says Dr Joshua Berkowitz.  “IV therapy is increasingly popular as a means to achieving optimum health and we have been looking for a new clinic outside London to meet the growing demand for our services.

“The Wellness Hub is the perfect site for IV Boost and we look forward to meeting its customers.  We recognise that IV therapy will be new to many people and clients can rest assured they will have a consultation before any therapy to ensure it suits their exact needs.”

Intravenous (IV) Vitamin Therapy has been practised for many years, often to support conventional medical treatment of a wide range of health conditions. It is the fastest way to deliver nutrients throughout the body because it bypasses the digestive system and is 90-100% absorbed directly into the organs (compared to 20-50% absorption if taken orally).

A vitamin shot is an intramuscular injection that treats various vitamin deficiencies. It is absorbed into your bloodstream via your muscles. Unlike vitamins taken orally, vitamin shots bypass the digestive system and result in a 90-100% absorption rate. Many people feel the effects within hours of the treatment which takes just a few minutes to administer.

Medical grade ozone is a highly active and reactive form of oxygen which is prepared by a highly skilled practitioner just before being administered. Ozone therapy can restore optimum oxygen levels in the body by increasing the red blood cell count and this, in turn, stimulates the release of oxygen into the body’s tissues.

Diagnostic testing gives a very clear picture of your health and can help pinpoint problems that may be missed through consultation or ‘standard’ blood tests offered by GPs. IV Boost uses a leading London laboratory which offers a very quick turnaround of precise, accurate results.

IV Boost can deliver a range of non-surgical treatments to enhance the appearance and treat the visible signs of ageing. These rejuvenating treatments use the latest evidence-based products and cutting-edge technology to deliver safe, effective and long-lasting effects. Performed to the highest standard, each treatment plan is tailored to address individual concerns to optimise results.

There’s never a perfect opportunity to declutter and sort through all your belongings, but it can be a very cathartic experience. Removing unwanted items from your home can help you focus on the things that really mean a lot to you.

A clear and organised space can help you feel more relaxed, and it’ll be much easier to destress without being surrounded by clutter.

During particularly stressful times, it can be easy to slip into bad habits like not getting enough sleep, which can make the stress worse.

A full night’s sleep will help you to recharge quickly, and provide you with enough energy to get through the busy days.

It’s easy to take comfort in junk food, especially with the convenience of takeaways. But eating unhealthily will put your body at a disadvantage when it comes to coping with and recovering from stress.

A healthy diet, rich in fruits, vegetables and wholegrains, is a great way to improve wellbeing.

Being in the outdoors is proven to be beneficial for your mental wellbeing. Surrounding yourself with greenery and breathing in fresh air is an excellent thing to make sure you do every now and again, especially if you’ve been indoors all day.

Many of us nowadays lead very inactive lifestyles, both at work and at home, looking at screens. However, short bursts of physical exercise are proven to boost your mood.

Releasing those endorphins into your system is an excellent way to unwind and to prepare yourself best for dealing with the upcoming stress of the day. Try going for a run in the morning, or a walk after work.

This year, Mulberry Homes has been running a monthly community fund, called The Mulberry Community Chest.

As part of the programme, charities and public organisations local to its developments are invited to apply to receive a one-off donation of £1 to £1000, and each month, a judging panel will select a beneficiary to secure the requested funding. For more information or to submit an application, visit https://mulberryhomes.co.uk/news/distinctly-local/.

Established in 2011 and based in Warwickshire, Mulberry Homes is a medium housebuilder that provides quality properties across the wider midlands. It specialises in individual and small developments with their own looks and personalities and builds traditional homes with modern layouts.